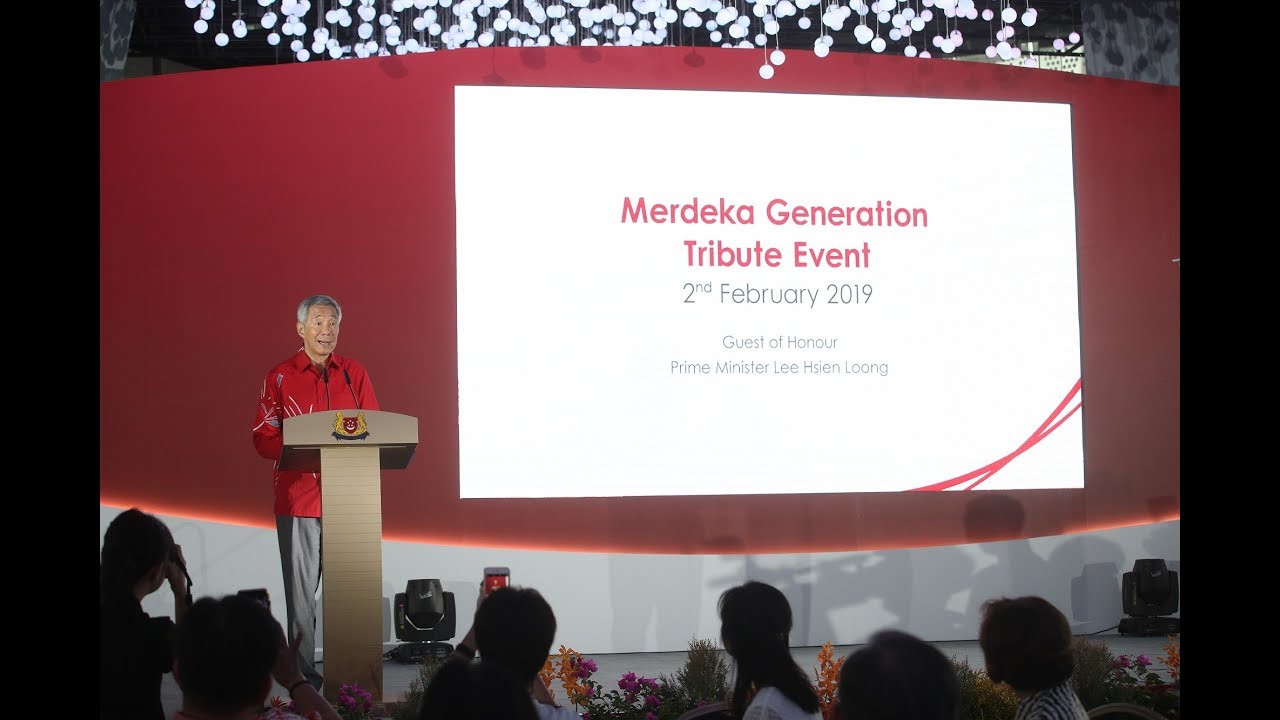 It is fitting that we are here at Gardens by the Bay. Our founding leaders envisioned a beautiful, vibrant new city centre for Singapore, with a garden right in the heart of it. So decade by decade, we reclaimed land from the open sea, built a new downtown on it, and turned vision into reality. It is a vivid example of Singapore’s journey from mudflats to metropolis.

The Merdeka Generation lived this Singapore story. Our generation built good careers, provided for our families, and have lived full lives. During our lifetimes, through our efforts, Singapore grew stronger, more prosperous and more united.

Today, we are mostly in our 60s. Many of us are still working, though quite a few have retired. We can look back with some satisfaction on what we have achieved together.

Our journey was not always onwards and upwards. In retrospect, it sometimes seems like we were sure to succeed in overcoming all these crises and problems. But in reality, this was not like a superhero movie. Success was never fore-ordained. As each crisis unfolded, it was a struggle and a fight. We could not tell if our solutions would work, or what the final outcome would be. We had to prove, each time, to ourselves and the world that we had the tenacity and unity to pull together and rise to the challenge.

Our most vulnerable moments were in the early years. 1965 itself was a defining moment for our people, for many reasons. Overnight, Malay Singaporeans became a minority. Overnight, our businessmen and entrepreneurs lost the Malaysian market. Overnight, relatives found themselves divided by a political border.

Barely two years after Separation, the British announced that they would withdraw their troops from Singapore earlier than planned. We risked being left exposed and vulnerable in a volatile and unstable region. But we gritted our teeth and served National Service, built up the SAF quickly, and kept Singapore safe.

Meanwhile, in the region around us, the Vietnam War was raging. In 1975, the North Vietnamese finally won – a humiliating defeat for the Americans. Laos also fell to the Communists. Cambodia also became Communist. We feared that the rest of Southeast Asia would also turn Communist. Fortunately, ASEAN held together and stemmed the tide.

More recent is the memory is September 11, 2001. The attack on the World Trade Centre in New York shocked the world. But what really shook Singaporeans was to discover, right in our midst, the Jemaah Islamiyah terrorist group, linked to Al Qaeda, planning similar suicide attacks here. This was a dire internal threat, not just to our safety, but to our racial harmony and national cohesion. But we did not tear apart. We held together as a nation, supported one another and collectively addressed the problem at its root.

Two years after 9/11, danger came from an unexpected direction, in the form of SARS. Fear and anxiety gripped the nation. Singapore nearly came to a halt. It took courage and discipline for people still to turn up for work, keep the lights on, and help neighbours along. Many of these unsung heroes belonged to the Merdeka Generation.

During your working lives, Singapore faced major economic crisis too. They came upon us about once every ten years. In 1973, the Oil Crisis sparked off raging inflation. In one year, prices shot up by 20%. You can imagine the impact on the cost of living of households at that time.

In 1985, we suffered a major recession, our first. We had been upgrading the economy, replacing low wage industries with high wage, skill intensive ones. But in the process, business costs rose too far, and we lost our competitiveness. We did not take the easy way out. We took drastic steps to cut costs, including deep and painful cuts in employer CPF contributions.

A decade later, we ran into the Asian Financial Crisis. The economies around us – Thailand, Indonesia, Malaysia – they were toppling like nine-pins. We could easily have been knocked down with them. But we took decisive steps, cutting CPF again, and supporting worker training during down-time to prepare for the future. As a result, we not only maintained confidence, but reinforced Singapore’s reputation with investors for sound economic management and enlightened, responsible workers.

In 2008, the Global Financial Crisis hit. Financial markets everywhere seized up. Trade and business plummeted. We had to draw on the financial reserves which we had carefully built up to help businesses and save jobs.

With time, the sharpness of these bad memories may have receded. But these were all defining moments for the Merdeka Generation. It is worth reminding ourselves of them. Because each time, the Merdeka Generation faced the problems resolutely, worked with the Government, and when necessary, accepted the bitter medicine that made us strong again. Each time, we pulled together and overcame the challenge.

The Merdeka Generation did this because we understood what was at stake. We had lived through the upheavals of the independence struggle in the 1950s and early 1960s, as well as the years in Malaysia. We saw what our parents went through. We were determined to pick up from them, and keep on building Singapore.

Looking back now, we can all see how Singapore has completely changed. Here we look out at Marina Bay, previously open sea but now our iconic skyline. Modern HDB flats are a far cry from the “chap lau chu” (ten story flats) in our first housing estates, and the kampong houses with no running water or modern sanitation. Our grandchildren enjoy educational opportunities beyond anything that our generation enjoyed. Our economy is more vibrant, our companies more prosperous, our jobs more fulfilling and rewarding. Our social fabric is stronger, our diversity is celebrated, and we stand strong as one united people. The Merdeka Generation played a big part in making all this happen.

Now, the Merdeka Generation is passing on the baton. But Singapore’s journey continues. We face new challenges – keeping our economy competitive, preparing for an ageing population, maintaining social mobility. And surely more challenges will come.

Singaporeans cannot afford to take them lightly, because success is never certain. But neither have we any cause to be daunted. For as the Merdeka Generation have shown time and time again, Singapore can and will come through, provided we pull together, and tackle the challenges as one.

At the National Day Rally last year, I announced that we would put together a Merdeka Generation Package. The package is for those born in the 1950s – the years when we strove for Merdeka – freedom, independence and sovereignty. Those born in 1949 and earlier who had missed out on the Pioneer Generation Package, but who obtained citizenship by 31 December 1996, will also qualify.

Minister Heng Swee Keat and Minister Gan Kim Yong will announce the details in Parliament later this month. So I shall not steal their thunder. But I can tell you without giving away any secrets that it is a substantial package, and will go some way to helping you with your medical expenses, and to expressing the nation’s gratitude to the Merdeka Generation.

I thank you all once again and I wish all of you a very Happy Chinese New Year!
Thank you.